Supplier power is represented by their ability to determine the terms and price of supply and will increase if there are fewer suppliers than buyers, if the organization is not a key customer for the supplier, or if their industry is not attractive for suppliers.

Buyer power refers to the pressure that customers exert on companies to obtain high quality products and services at lower prices. Buyer power increases when there are few buyers and many sellers in the field, or when products are not significantly differentiated and can be easily substituted. For the seller, buyers’ demands represent costs. This means that the stronger the buyer is, the less profit available for the seller, which is why many companies try to develop strategies that reduce the power of buyers.

Another set of forces included in this model are the threats of new competition and substitute new products.

Profitable markets are more likely to attract new entrants, especially if there is considerable profit to be earned and barriers to entry are low. Newcomers increase the level of competition and also decrease profitability for existing companies. However, there are methods to control this threat, such as through regulation, patents, capital requirements, access to distribution, brand identity, absolute cost advantages and government policy.

As with reducing the threat from new competitors, companies can use different strategies to protect their products using trademarks, patents or strong branding to differentiate them from substitute products.

The last force involved in this model is the intensity of competitive rivalry, which is the major determinant of competitiveness of the industry for most companies. It also relates to the rest of the forces described above. If an industry is easily accessible to new entrants or if it is easy for customers to choose substitute products, we can say that competitive rivalry is likely to be high.

Competitive rivalry also depends on factors such as the structure of competition, degree of differentiation, or strategic objectives. As is mentioned in the video, two more forces can be added; social factors and the economic environment. These can sometimes be seen in government actions which have an important influence on business in some countries, and the internal rivalry which occurs between departments of the same company. 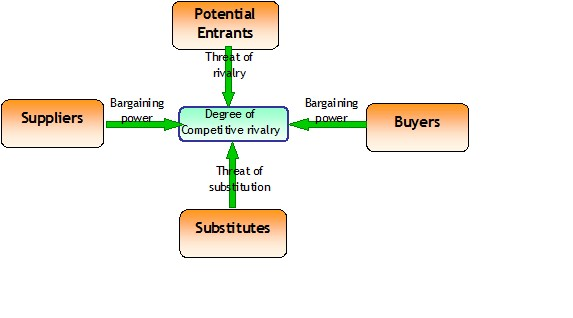 In order to turn this model into an efficient tool, we need to work with real figures, otherwise it is a subjective and abstract framework. We need to justify and quantify statements otherwise it will remain purely conceptual. An in-depth analysis of the five forces would include questions on:

Having a clear view of these elements can help the organization decide where best to allocate its resources.