The Product life cycle concept describes the stages that a product goes through from the moment it is launched into the market, until it eventually declines and it is withdrawn. 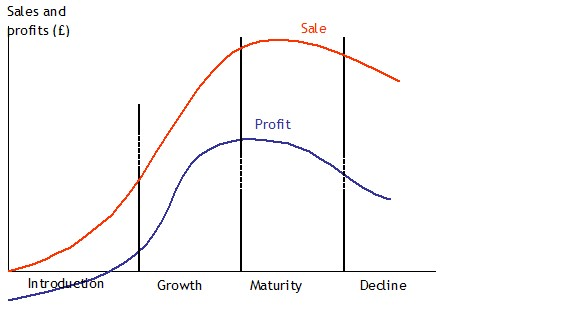 The stages begin with ‘ Introduction’, which encompasses research, development and launching of the product. Then we have ‘Growth’ when sales increase at a fast rate, followed by ‘ Maturity’ when sales reach a high stable point but the rate of growth is decreasing. The final stage is ‘ Decline’, when sales begin to fall.

However, not all products go through these phases sequentially. For example, some go directly from Introduction to Decline. Others can experience continuous growth if they benefit from a good brand strategy and are constantly improved.

The PLC concept was originally presented by Everett Rogers for new products and how they get adopted over time. An interesting point is that at the moment of launch there is a percentage of consumers in every market called ‘ innovators’. These individuals are often of higher net worth than average which gives them the ability to take risks. Also, they are in close contact with technological resources and other innovators, which exposes them to a product in its initial phase on the market. This group can be very useful as they provide valuable feedback on a product and are also often ‘ opinion leaders ’ in society, such as celebrities, who can give valuable promotion to a product in its early days.

The next category is ‘ early adopters ’ who are generally independent-minded, highly-educated individuals. They are also opinion leaders and usually the first to adopt new products or services whether it is technology, sports or fashion. They are the ones who give a market credibility so usually when a product curve reaches a high percentage of this particular group, the subsequent stages of product life cycle happen automatically.

This is when the ‘ early majority ’ group plays an important part. They are also well educated and financially stable individuals who follow early adopters after a varying degree of time and sustain the growth of the market.

With time, fewer new people will come into the market so the growth rate will start to decline and finally the product reaches the ‘late majority’. These are often lower economic groups for which price tends to be important. They are individuals with lower social status levels and lesser financial means, meaning they are usually skeptical about innovation and change.

Finally, the last to adopt a new product are ‘ laggards’. These individuals are usually more advanced in age and have an aversion to change, being more focused on traditional values and products.

An important conclusion of this analysis is that companies tend to focus their efforts across the whole market when launching a new product, when it is obvious that certain segments will not be ready for the product yet and will show no interest in it. In the early stages of the PLC, organizations should focus

most of their efforts on the early adopters and opinion leaders , using different strategies to attract these early buyers.

The video below is part of our Marketing Strategy for Business Course bundle - including Market Segmentation Course.